Review: The Brand-New EM Touch From Wildlife Acoustics - Part 1 of 2 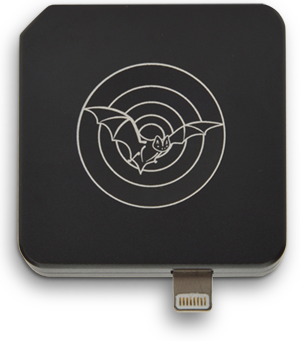 By now, even those with a passing interest in bat detecting will have (no doubt) heard about, or seen the brand-new Echo Meter Touch from Wildlife Acoustics. There have been several Photos and video Demos of this new bat detector circulating The Web.

Some seemed to have already "passed judgement" on The EM Touch. It seems that a few people have already made up their minds; both for and against it.
Perhaps this may be attributed to the fact, that this device is so new, there aren't enough actual owners/users yet?

Therefore, my responsibility as an objective reviewer seems to loom ever greater...

I will confess, right at the start - Even I made a few (minor) assumptions, prior to having access to the User Manual and receiving the equipment for test. Read on...and all will be made clear.

It's hard to deny, that Wildlife Acoustics ranks among the very few companies, which rather enjoys being on the cutting edge of bat detecting technology. One need not look any further than their past and current bat detecting solutions.

I once read, that "If you truly love a Hobby, you want to share it with others...with everyone". This is essentially what I try to do, when it comes to the hobby of bat detecting. It's also why John Dobson spent many nights on the street in San Fransisco, allowing passerby's to have a look through his telescope...
And a passion to share, also seems to be the case with certain detector manufacturers. Yes, of course they are a business, but in addition to selling bat detectors...There's the subtle attitude, of wanting to share new technology with those who record bat calls. In fact, one can plainly see, that Wildlife Acoustics is one such company (there are, perhaps one or two others).

Apparently, this time - Someone there had Apples on their mind (no, not fruit) - The Apple computing devices. The EM Touch is currently compatible with almost all of the newer Apple iPads and iPhones. Click Here for a complete (and dynamic) list.

Of course, the list of compatible devices is likely to expand in the future, as The EM Touch is not simply a stagnant bat detector - But a lively, progressive bat recording device. An ultrasonic recorder which will be constantly morphing and improving; all while hovering at the bleeding edge of technology. I have a feeling, that this prospect will appeal to many. If bats and portable computing technology are among your interests: Then you'll certainly want to set yourself up with one!

The packaging of the Echo Meter Touch is really cool: 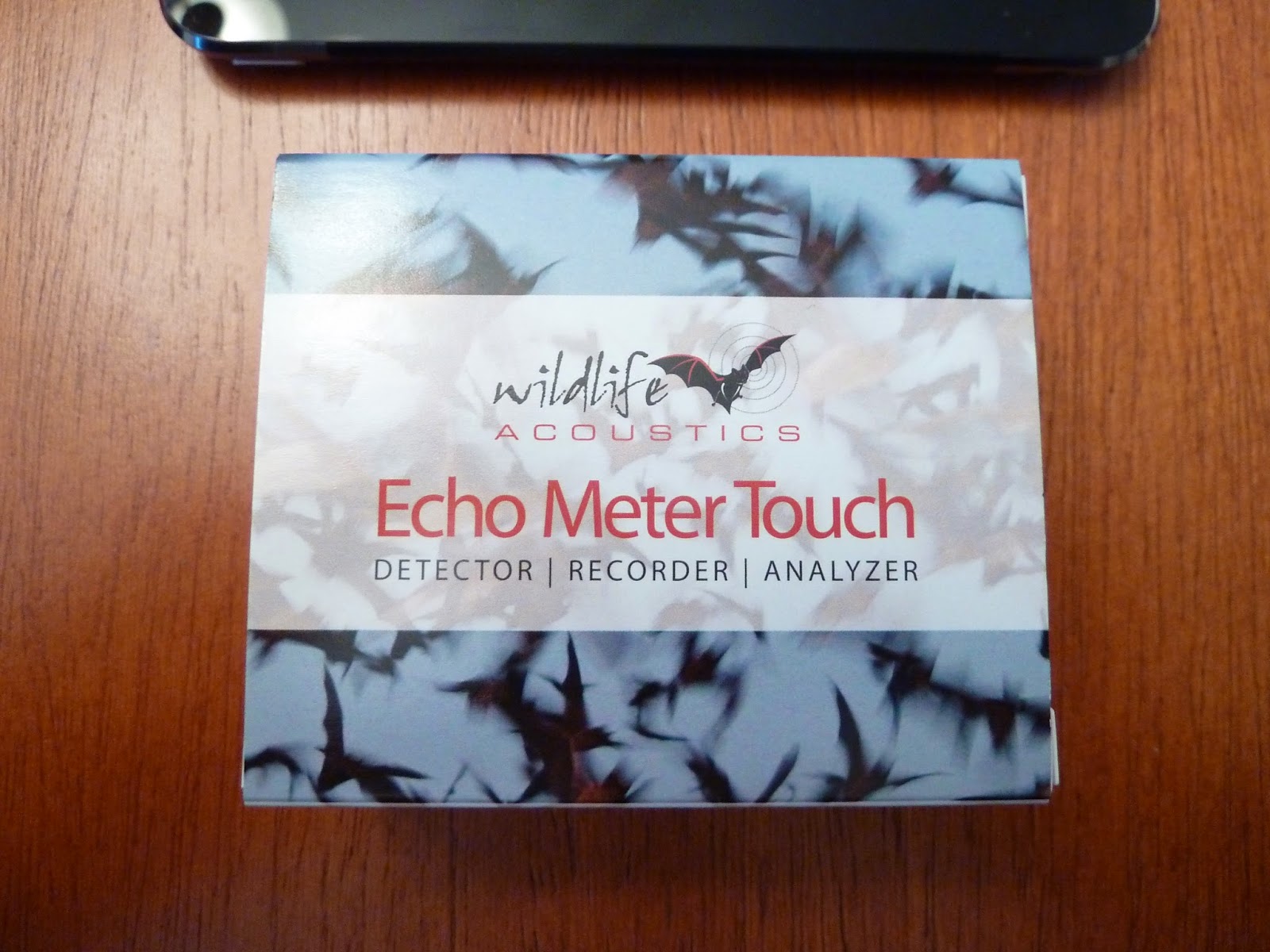 The attractive box which The EM Touch is packaged in


This brand-new Echo Meter Touch features an omni-directional, FG microphone element; which has the added benefit of being weather resistant. Some may choose to use it for some unattended recording, with the aid of a Lightning Cable extension. Although, while testing the review unit, I managed fine without one.

Even though, Wildlife Acoustics themselves would be the first to tell you: They do not intend for the EM Touch to be used for unattended monitoring.
I have used it for unattended monitoring/recording of bats quite a bit. When set-up near a window, in a rural/quiet environment (sans man-made noises) it performs admirably, for a whole evening's worth of monitoring.
I presume that many potential owners, might make the very same (or other) assumptions; simply based on how The EM Touch looks. As seen pictured in several (small) advertisements, in online catalogs, and other Web sites: It seems to give one the impression, of being a dynamic, hand-held bat recorder - Fine for use in the field.
But, few would ever guess that it also:
It sports a 256K Sample Rate, 12 Bit full-spectrum .wav file recording, and includes a recording range from 8kHz to 125kHz - Which means I get to record some singing insects when the mood strikes me. 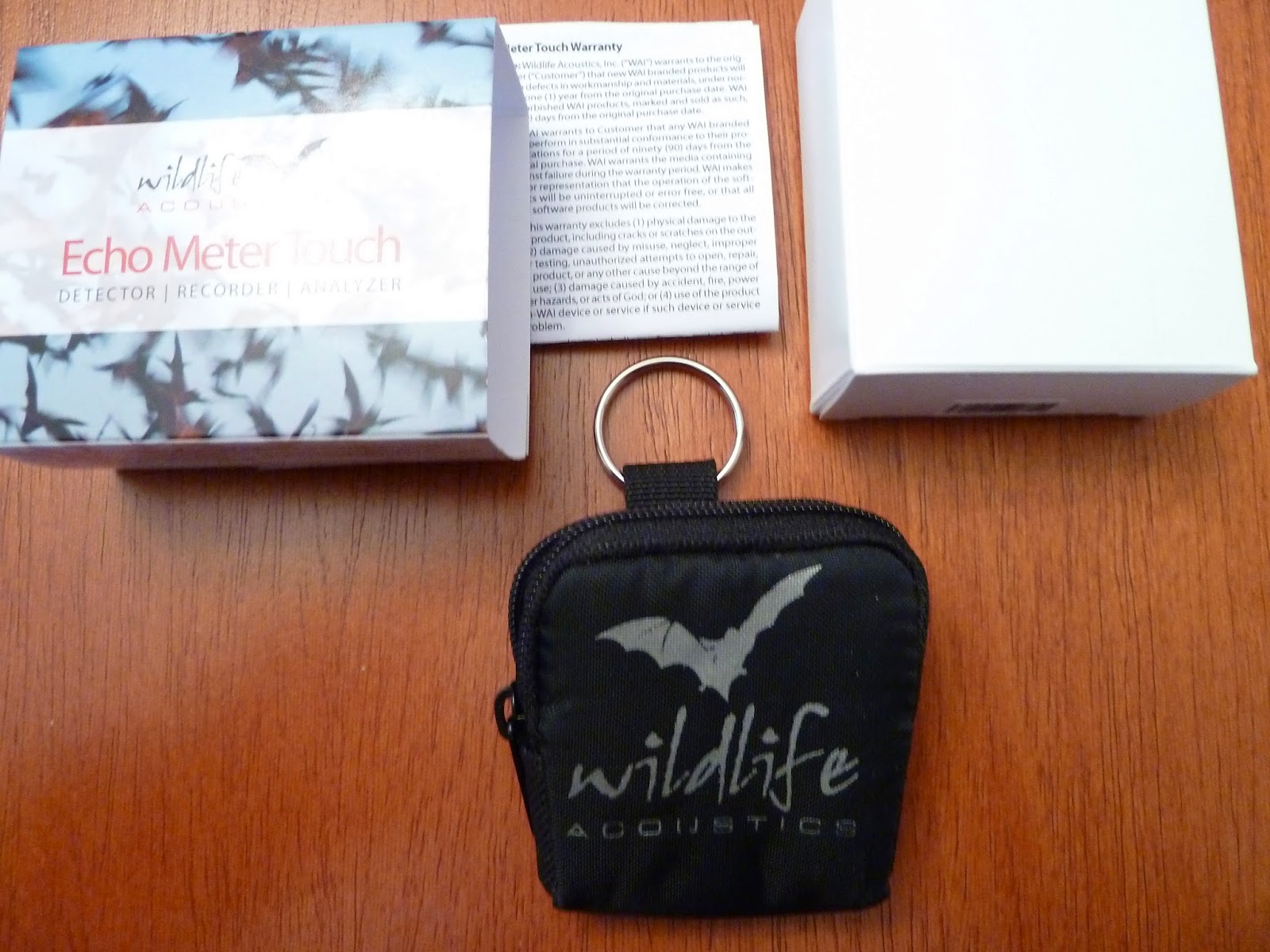 The EM Touch is delightfully small; even when inside it's protective case

Looking at the photo above, one can plainly see: What we have here, is truly a super-portable bat detector. Not just a small frequency division or heterodyne detector, which simply produces clicks, or "plops", etc. But, a full-spectrum recorder, that is quite capable in it's own right. With the added benefits of looking at/recording a live spectrogram while detecting in the field.

In fact, when you stop to think about it - This new Echo Meter Touch is really in a league of it's own. I'm not sure, if typical FD/Het detectors should even be mentioned in the same paragraph!
However, in this case, I bring them up simply because of the similarities in size (and portability).

Although The EM Touch may be even smaller than the average Hobbyist's detector - It is a device several magnitudes more capable than a typical bat enthusiast's detector.
And, yes - It's price is also several magnitudes higher. Especially, if you do not already own a compatible Apple iOS device.
It is true, that in such instances: Your initial monetary outlay may be considerable. All of this is just idle speculation, of course. Everyone has their own particular budget constraints.
Take me, for instance - I (still) consider myself to be an average bat detecting Hobbyist / enthusiast...
I have only a (very) modest income, and limited discretionary funds - Yet, I saw fit to begin the process of equipping myself with an iPad mini Retina, to be followed by an Echo Meter Touch, and required software...The EM Touch application is free, on iTunes.

I'd like to try and share, what I found, during my individual "journey": Which consisted of first buying myself an iPad mini Retina. The first thing I found, was that the iPad naturally filled an "opening" or "void" in my daily technology needs. Technology Geeks will no doubt, understand what I'm referring to here!
In layman's terms - I now wonder how I ever got along without one! An Apple iPad, that is. In short, I've found The iPad mini Retina to easily outperform my (usual) Asus mini-notebook; in just about every aspect.

On the other hand...

What if you do already own a compatible iOS device? Well, then it's a "no-brainer" (as they say) - If the cost of an Echo Meter Touch is in your considered budget - Then, the choice is simple: Go for it!
Why? Because you are simply getting the absolute most-for-your-money in the case of an EM Touch. It is the obvious choice, in it's price range. Remember, that The EM Touch Application is free in the  Apple iTunes Store.
So, the only software purchase - Which is optional - But, highly recommended! Is the Bat Auto-ID Feature. This is an in-app purchase, currently priced at $149.00 (U.S. Dollars).
In the spirit of clarification, I've taken the liberty of pasting a paragraph directly from The Wildlife Acoustic's Web page below:

"If you need to identify bats in the field you can add the Echo Meter Touch Bat Auto-ID feature ($149.00 in-app purchase). Featuring Wildlife Acoustics Kaleidoscope Pro algorithms, the software quickly and accurately identifies bats species. The Bat Auto-ID feature includes all Kaleidoscope classifiers and will be continually updated with new classifiers as they become available."

[Here, is where I should probably re-iterate, that I am not affiliated with Wildlife Acoustics in any way. As always, I'm simply doing my best to share my experiences and opinions]

Again, everyone's budget is different, of course! There are many Hobbyists and (especially) Beginners, for whom this route would be outside of (or place a strain on) their budget. And, yet there are many for whom The EM Touch would be exactly what they were looking for. I've had several people message me recently. Each wanted a bat call recorder, which would allow them to record and analyze the spectrograms of bats. They were willing to use external recorders and audio cable connections, to capture the calls picked-up by the already somewhat costly detector. These people were starting out with budgets, which would've easily allowed them to get an EM Touch and the Bat Auto-ID Feature. This is the optional, in-app purchase.

The catch? They would have to already be proud owners of one of the (compatible) iPad devices. Even the correct model iPhone, and they'd be up and running! But...If not, we are back at the "Budgeting table" - Discussing the acquisition of an appropriate iOS device. 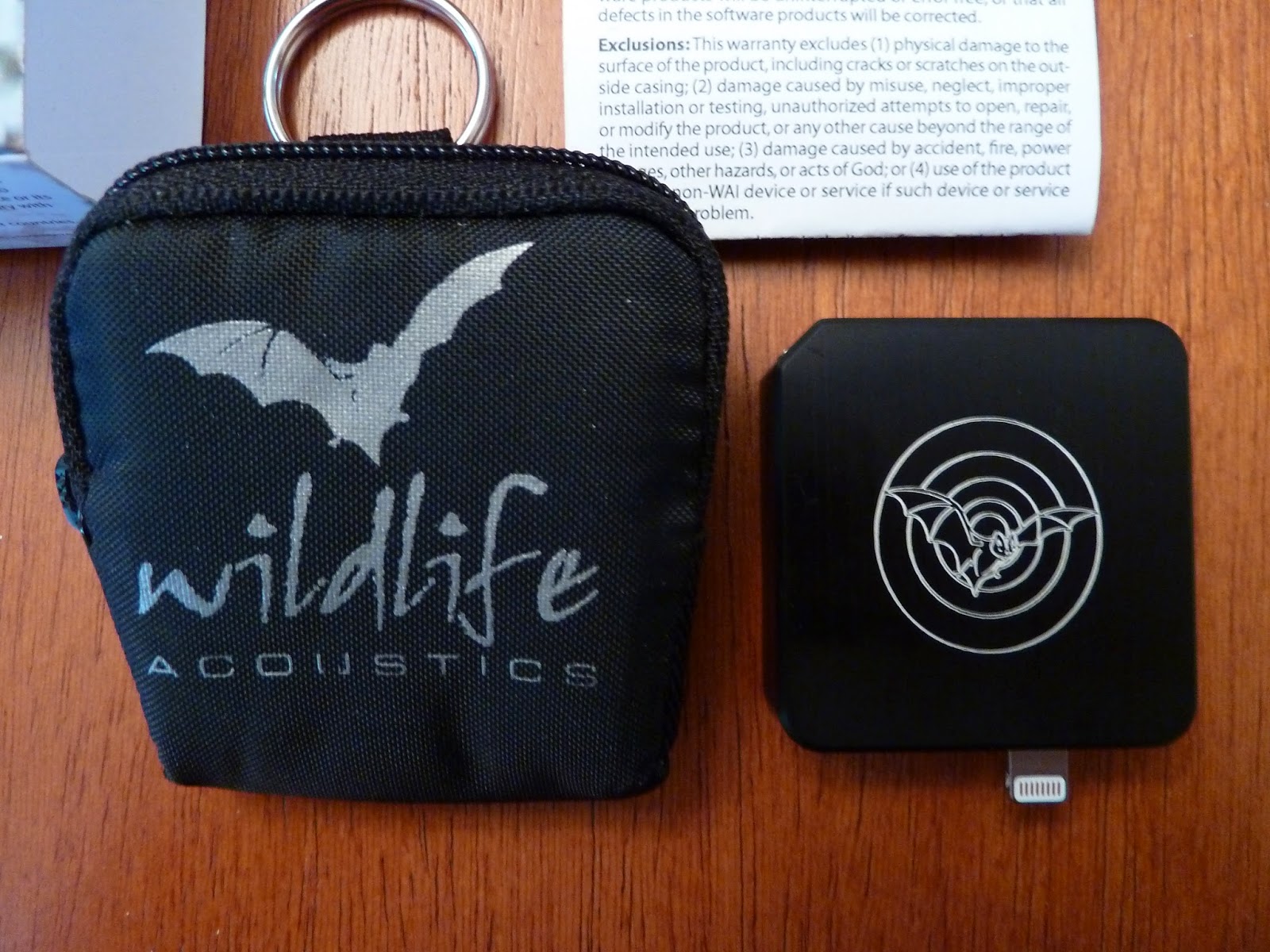 Installation, is a piece of cake, of course! And the more familiar you are with your iOS device, the quicker it will go. As you might expect - The most time-consuming portion, is the download and install of the software (from Apple's iTunes Store). Which, after all, only takes about 5-10 minutes, at most. If you do a bit of reading on The EM Touch App's page, you'll see that there have already been some small improvements made. And, I've always been a fan of ongoing improvements!

Once installed/set-up - The Echo Meter Touch is truly, very easy to use. Operation of the iPad application is intuitive, and I found it to be a spontaneous, and fun learning experience! The layout of the application's buttons and Menu choices are all conveniently implemented. No one will ever be able to accuse the EM Touch application of being convoluted, or difficult to get acclimated to. It all seems to flow very naturally during normal use; this is a big plus while in the field.

You may get an idea of just how well everything flows, by watching a couple of the short videos, which have been recorded so far:

The original, from Wildlife Acoustics

A brief one, from NHBS (in UK) via YouTube

A new one from Wildlife Acoustics


Yet, at the same time - You can become even better acquainted with it's capabilities at your leisure, via the (dynamic) User Guide, which you can read right on your iOS device.

Now, I cannot divulge any specifics - But, I will reiterate: In the months (and even years) to come, The Echo Meter Touch will improve and morph in ways, which many of you would not expect. The software end is already being updated, my test iPad automatically prompted me to download/install updates (to Ver. 1.0.4 now). And, let's not forget (one of my favourite little wonders) Firmware updates!

Now, more than ever, I hope that my summary and descriptions are helpful. And, I'm currently hard-at-work on Part 2 of this review; which will answer many of the questions (and concerns) on everyone's minds.