The Song Meter Micro is an unattended recording unit. It's so small and light, that I frequently put it in my pants pocket, before climbing up some steep terrain to deploy it. And, there have been several times (lately) when I've been very thankful for this ability. 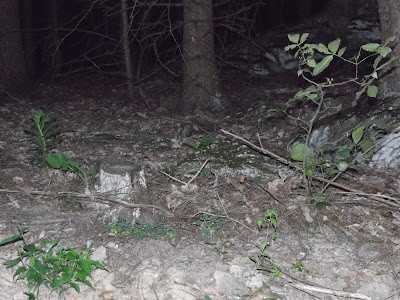 In this instance, The SM Micro was placed just behind the small tree stump to the left of center in this pic.

The location for The Song Meter Micro (in pic above) was chosen, because a small animal was captured on trail cam video in that vicinity. Viewing the snapshot above, one might think it'd be easy to get to that tree stump...what isn't obvious however, is the very steep climb involved!
In general, it's easy to set-up and deploy. Whenever possible, I try to anchor it to a tree (using a small/short screw) -or- fasten/tether it to a branch, tree trunk, etc. I do this, to prevent the (unlikely) event of an animal walking off with it. Just in case some animal decides it would make a good chew toy?
As a side note: A Coyote were heard (close by) just last night (8/18/2021). A Great Horned Owl was heard today, it sounded like it was only about 40 meters away!

The Song Meter Micro would be a great choice for Ecologists needing a programmable, unattended wildlife recording solution. The Micro is capable of recording vocalizations from a wide range of species. As mentioned in Part 1 of this review, the sample rate may be changed, to better suit the target species. Admittedly, I've failed to do this myself in the past. For no other reason than being hasty and too anxious to get it set-up before nightfall. Also, from years of using portable digital recorders for wildlife recording: I got into a habit, of always setting the Kbps to whatever the highest setting available was...
(wildlife sound recordists will relate)
Last weekend, right after moving into my new (rental) home, I found myself without a recording bat detector handy. I tend to always keep a Batseeker 4 around; but having a non-recording (FD) detector available just wasn't cutting it. I had a simple digital recorder, but couldn't locate an audio cable (everything was still in boxes).
It was a case of the glass being half empty (to me). In fact, it was quite a bit worse than just the glass just being half empty. Taking some time to observe and detect bats, at my new place, without the ability to ID and/or record bat calls was frustrating! Not fun for any experienced bat detecting enthusiast!
There I was, in a proverbial "pinch" - Wanting to record and * ID the species of bats, which were flying so neatly, high above me... And all I had to hand, was an entry-level, frequency division detector. There wasn't even a heterodyne unit around; where I could've at least ID'd a few "by ear".
At least then, I could've gone to bed with a sense of accomplishment - Perhaps after having written some acceptable notes in my nature journal...But it was not to be; not that night.
This is not to say that there is anything "wrong" or lacking with the inexpensive Batseeker 4. On the contrary, it's still the least expensive way for someone to try bat detecting first hand. But, it is an entry level bat detector designed for beginners.
The following evening, I decided to utilize The Song Meter Micro for a full evening's worth of unattended bat recording...I was keen on figuring out exactly what the predominate species of bats were here.
I set-up the Micro's settings as follows:
Sample Rate: 96000
Maximum Recording Length:  10 Minutes
Gain: 6
Delay Start:  off
Start Time: Set (Sunset) 00:00
Time Duty Cycle: Always
End time: Rise (Sunrise) - 01:00
These settings worked well for my purposes. Let's not forget that The Song Meter Micro was designed to record non-bat species...
And I've also used the built-in 'Record birds/frogs 24 hours a day' setting, with good results as well.
And while utilizing the latest version of Kaleidoscope Pro software, I was able to get some decent results (when compared to having a dedicated [designed for] bat detector).

The Silver-Haired Bat (Lasionycteris noctivagans)
appears to be the most abundant species here.

One of the things I really enjoy about The Micro, is the ability to use Bluetooth to check it's status. Now first I will point out the typical maximum distance of Bluetooth, when considering smart phones & tablets - The general consensus is 10 meters (30 feet). If I remember correctly, back when Bluetooth was first announced, it was 15 feet?
If you're interested in the official (specification) for Bluetooth communication between (various) devices; and under various circumstances - You're free to become engrossed with this page, from Bluetooth itself. Note: The short video provides an amusing summary!
But, I digress...
The gist of it is, that I find it fun to connect to the deployed Song Meter Micro via Bluetooth, to check it's status. Especially, if the unit it set-up in the back garden, and I can check it while comfortably in bed: 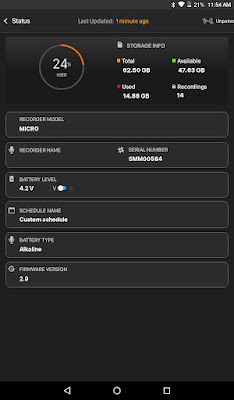 General status of Song Meter Micro via Bluetooth
(using Lenovo tablet)
As seen from the screenshot above, the data provided are the most essential factors. The 2 which I typically look at, are: (number of) Recordings, and Battery Level. I'm also happy to report that I've typically been able to communicate with The Micro from distances well on the plus side of 10 meters.
It's interesting to see it connect, while the distances between are not line of sight, through house walls, at odd angles, etc. 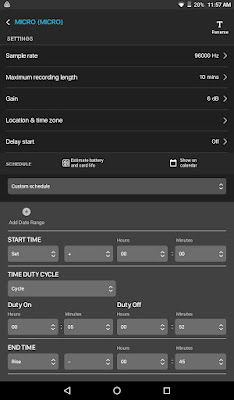 Personally, the species I've been hoping to record are Shrews; (Blarina Spp.) Short-Tailed Shrew, specifically. None confirmed yet, but I've recorded plenty of interesting species in the process. The Micro is well suited for recording many different species, and will be popular with Ecologists in the field.
To summarize, and point out additional features:
The Configurator App (on your smart phone or tablet) conveniently shows the recording space available on your installed SD card; and your battery status.
The User Manual states that mounting methods include bungie cords, zip ties, or cable locks - I agree; I've found zip ties of various sizes to be useful. 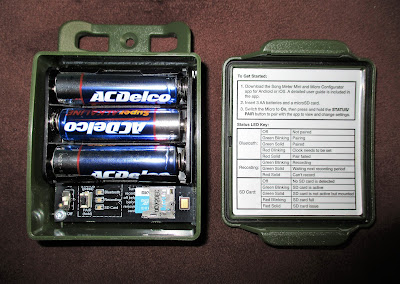 Inside The Song Meter Micro - Note: Always use good quality / good name brand batteries (not like the ones installed above)

As mentioned in my video review, on The BatAbility Club's Site:
I originally had issues when syncing the time/time zone, using my Lenovo tablet. I did not encounter the issue when testing/using The Micro with other smart phones & tablets.
The Preset 'Record birds/frogs from sunrise to sunset' is perfect for recording birds.
Remember to tap the 'Load' icon, to display a list of saved configuration files, while in the Configurator App.
Tap the 'Save' icon to name and save the current configuration/settings to the Configuration Library.
To save new changes to the Configuration Library, tap the Save icon again.
The microphone has a Test Microphone feature. It allows you to check the status of the Mic's sensitivity; as well as calibrate it (with a third-party calibrator).
Choose a sample rate that is at least double the highest frequency to be recorded. 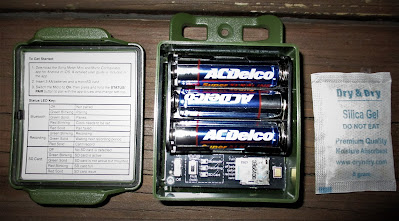 Utilizing a silica gel packet (inside the unit) when deploying, is an excellent tip from Wildlife Acoustics.
Again, The Song Meter Micro was made was designed to record vocalizations of non-bat species. So far, I've made very good recordings of: Fowler's Toads, Wood Ducks, various songbirds, various singing insects, Great Horned Owl, Coyote, and in a pinch: Bats. 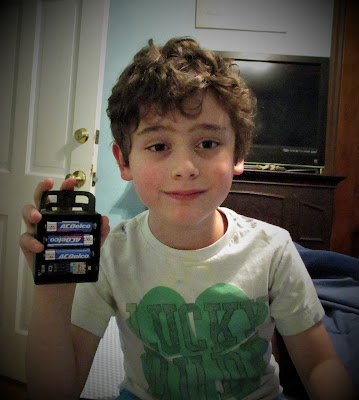 I think my Nephew Gabe approves!
Next-up: USB based bat detectors from Pettersson! The M500 and U384 Microphones - Video presentation review on The BatAbility Club!
If you haven't already, you should consider becoming a Member - Neil Middleton has interviewed almost everyone who is anyone in the world of Bats!
Including extensive interviews with Lars Pettersson, David King, and none other than Merlin Tuttle!! And many, many more...
Until then, Happy bat animal detecting!

Posted by batdetectors@gmail.com at 10:00 PM No comments: