New Must Have Book For UK Readers! British Bat Calls

An awesome new book will be shipping soon. It will be of particular interest to bat enthusiasts in the UK:

...How I wish such a book existed for American bats! *sigh*
You Folks in the UK are very lucky (in more ways than one!)...

You may pre-order the book, from NHBS via the link below:

Posted by batdetectors@gmail.com at 10:00 AM No comments:

I'd like to share a really nice bat detector page I just "discovered" - The author of the blog, Johann Schilling, was nice enough to include a link to my blog on it : )

(It's in German, but can be easily translated with Web-based tools if need be (Babel Fish, etc.)

I strongly urge you to visit, and have a look around! - There are some incredibly informative links about bat detecting there! (many of which, are in English).

Happy bat detecting!
Posted by batdetectors@gmail.com at 4:35 AM No comments:

Pettersson D240X Review In The Next WSRS Journal

For those who are interested, or who are already Members - Just FYI:

The Spring 2012 edition of the WSRS Journal 'Wildlife Sound' 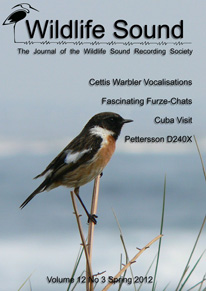 
It will feature a slightly different version, of my review of The D240X.

Posted by batdetectors@gmail.com at 2:34 AM No comments:

In addition to detecting bats: I occasionally do enjoy detecting, and attempting to identify Orthopetra (various singing insects). I'm going to try to keep this post as brief as possible. I simply want to share the results of tests I've done; using a few different bat detectors, etc.
For those who are also interested in singing insects, there are two books that I can highly recommend:
The first is 'Guide To Night-Singing Insects Of The Northeast' by John Himmelman.
The second, is called 'The Songs Of Insects' by Lang Elliot and Wil Hershberger. They both cover the Orthoptera of the Northeastern United States.
In the US, they may be found just about anywhere books are sold.

For Readers in the UK & Europe who are interested, they may be purchased from NHBS, by clicking on the links below:

The second book, is the one I used for my testing: I used recordings from the (included) audio CD; limiting my focus to the songs of insects that happened to be in the sub-audible range. I suppose they may also be described as "near-ultrasonic". In other words, tracks that I had a bit of trouble hearing with the naked ear. I find the whole subject rather fascinating. Here are the track numbers used, along with the insect names:

So, the tests were really simple: Did the device or bat detector used "hear" the recording or not?

Well, that's really about it - I'll gauge the interest in this subject/post, and if it is "popular" then I may do the same test with a couple of other bat detectors, etc.

Happy bat (and bug) detecting!
Posted by batdetectors@gmail.com at 11:09 PM No comments: