One of the things I'd like to try to get across (again), is just how small this unit is. I find it amazing: Such a small device, capable of such amazing data collection. As pointed out, on the manufacturer's site - The unit does feature great craftsmanship and quality materials. 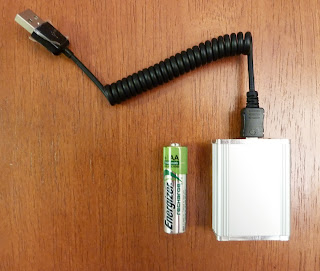 A keen observer might have noticed that Avisoft products are not always mentioned, in the "mainstream" discussions of bat detectors. They are sometimes also missing from many (if not all) bat detector comparison charts. Maybe it's because they are so inherently different than many of their counterparts. Perhaps the reason is that these products are something more, than the typical handheld (top-of-the-range) bat detector. And still, there may be other reasons...

When you purchase this instrument and it's accompanying software, it's as if you're getting a small Bio-acoustic Lab; in a complete kit. As such, a certain level of complexity is to be expected. At the same time, I'm sure that many discerning users would welcome it. In the screenshots below, I've illustrated two of the main dialog screens which a user would be adjusting. Note: These would be fairly typical, of a user interested in recording the echolocation of bats...We should remember, that other wildlife sound recordings may be made with Avisoft devices and software. A user could easily configure several individual .ini files (one for each specific recording purpose) and then choose to load them at at start-up. 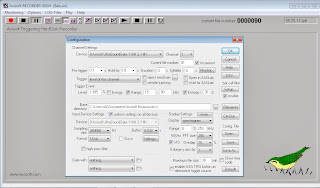 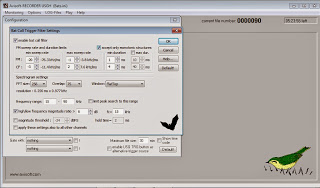 Now, if someone were to want try their hand at recording some ultrasonic calls of singing insects, as I did on this particular evening: They might make a few of the same configuration choices as shown below (notice Freq. Range is 5 to 30kHz).
Note: These windows would each be opened and configured separately (one-at-a-time).
I have deliberately opened both, and made one screenshot: 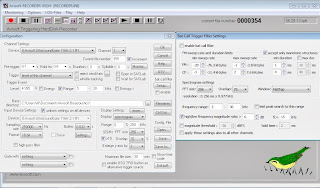 These are just a few simple examples of the many possibilities and combinations available, when it comes to software configuration.

When ordering the USG116Hnm, you have a couple of models to choose from:
One is provided with a built-in 'EP3' electret microphone (part#31180). The other with a Knowles FG (part #31179) microphone.

Again, I would urge those who are interested, to visit the USG 116Hnm page, and go over the specifications of the devices right on the Avisoft Site.

There have been a few occasions, when other (high-end) detectors under test detected/recorded bats - While the Avisoft did not: But, this may be traced back to "User Error" in configuration. In other words, my 'Threshold' (and other settings) were not set at their optimum levels (at that point in time). But again, all things considered, it's always performed very well.

For my tests, the unit has always had plenty of sensitivity to spare - Just as sensitive as several of the other top-of-the-range, 'Alpha' detectors.

If Batman were to be seen using a detector, it might be the USG 116Hnm! The New Black model pictured below: 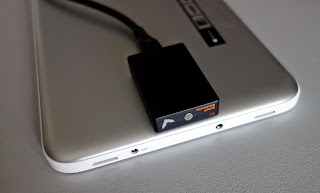 I'll probably be be following-up soon, with a post discussing the formidable software that is provided with the UltraSoundGate Series of devices - To cover some more aspects of Recorder USGH -and- Avisoft-SASLab Lite, screen capture shown below: 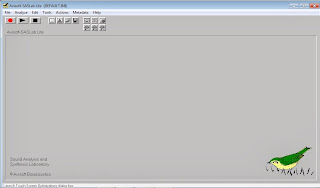