I happen to like this software very much. As is the case with the recently reviewed Batlogger M detector, I simply cannot seem to find anything to complain about! It's very well-designed.
The ideal user of this (free) software would be anyone who owns a Batlogger detector. If you use this software with recordings that were made with a Batlogger (any version) - You will be pleasantly surprised at how well everything flows together.
The next user that Batexplorer would be good for, is anyone who has bat calls that have been recorded using either: A frequency division, full-spectrum, or time-expansion bat detector.

Right from the start, it's easy to become very fond of BatExplorer software - The first thing you'll notice, is that the interface looks just too cool for words. I absolutely fell in love with the colours! 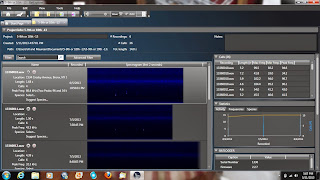 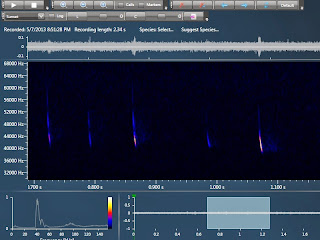 Zooming in on a bat call a bit

Why do I like this software? Because it's multifaceted, elegant, and works as well as it looks. It works beautifully; and it's easy and fun to use. It has a very low "frustration factor". The work flow does just that: It flows!
The good news is that after reading the User Manual a bit, you'll be ready to analyze just about any (.wav file) bat recording you've made. Except for those made with a heterodyne detector, of course.
The not-so-good news, is that the software really only shines when using recordings made by a Batlogger / Batlogger M. If not, you're basically limited to viewing one .wav file at-a-time.

For example - After a night (or two) of bat detecting/recording - Either passively or actively; you (should) have an SD memory card filled with recorded ultrasonic sounds. Many from bat passes. For the typical user of these products, I realise that detailed explanations are not necessary. But, in any case:  -Launch software-  -Insert memory card- -Import recordings-
The software suggests simple 'Project' titles, for the major file Folders where your .wav files will eventually be stored.

Among the new features, in version 1.8 is a system log of sorts.
Reminiscent of the Log File from a Titely Anabat system/software: 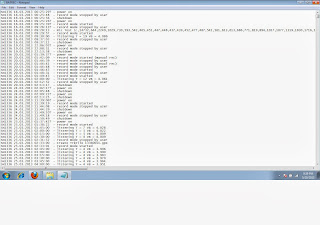 As I always say, it reminds me of a log file from a computer server (of which I've seen many).

The BatExplorer software emulates a lot of the features which are present on the Batlogger detector. As for Pros, some of the components that come to mind, are:
As for Cons:

The reality is, that Elekon's BatExplorer software is very well developed and is packed with amazing features that I haven't even touched on in this review. The fact is, that BatExplorer has too many features to properly cover in a review of manageable size.
Luckily, I won't need to explain every function, since anyone can download it and check it all out for themselves!  But, some really neat and useful features that come to mind, are things like:

* The way it breaks down each recorded bat pass - And indicates: Length, Max/Min/Peak Frequencies.
* The Statistics feature, with a bar graph of Peak Times of bat activity.
* It's ability to utilize detector-recorded metadata in various ways.
* The Map feature, which allows you to accurately plot locations of detected bats.

As always, I will update this post if there are any immediate/unexpected changes or improvements to the BatExplorer software package.