Review: The BatBox Griffin From BatBox, Ltd. (UK) Part 3 Of 3

Review: The BatBox Griffin Part 3 Of 3

Of course, as many of you are aware, The Griffin from BatBox experienced some delays prior to it's actual release. This was a disappointment to many bat enthusiasts, and especially to bat working Professionals. Only because many Pros were very anxious to try The Griffin!
When I log my bat recordings, I generally like to record:
The location, the date & time, and the weather conditions; including temperature and the current wind speed. One of the reasons for this: Is that quite a few texts & books written on the subject of Bats, mention the importance, and impact of wind on the flight behavior of bats. With The Griffin, time & temperature are recorded for you. 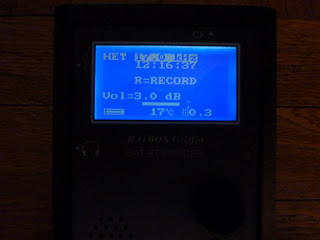 Above: The unit is in heterodyne mode (indicated by the 'HET' at the top of the screen)

In a recent e-mail I received, someone inquired as to the sample rate of this unit. The Griffin uses a sample rate of 705.6 kHz to accomplish it's time expansion detecting. But, makes the actual recording at a sample rate of 44.1 kHz (16-bit PCM).
As mentioned, in Part 2 of this review: There are many great updates and changes planned for The BatBox Griffin - As soon as these additional improvements are made, they will be described here, in detail.

The latest news I'd like to share, regarding The Griffin; is that I've gone ahead and updated the firmware on the system. Twice. In order to get the system up to the latest firmware version (V.20).
These firmware packages can be downloaded from the BatBox - Griffin Web page.

Very easy, and straightforward; each downloaded (zipped) package includes a Word (Text) document, which guides you through the process.

As with many computer-based instruments (as well as many PC systems themselves) the instrument must be updated in a progressive order. So, to get to Ver. 20, you must first successfully update to Ver. 18. (Ver. 19 did exist, but was for testing purposes only).
So, firmware version 18 was unzipped, and installed as per BatBox's instructions. The firmware upgrade process has The Griffin behaving just like a PC. The removable memory card is used to perform the upgrade. The process was finished in less than the 10 minutes stated in the accompanying instructions.

After completion, the unit reboots itself - The screen displays: A blinking cursor, followed by "Upgrade finished", and "Starting Griffin"
Although I knew that I'd be following up, right away, with the next firmware update: I wanted to do a bit of testing, following this upgrade. - As with most firmware updates - The issues addressed, improved features, and/or changes are listed by the manufacturer. What I found, in addition to these - was that the unit was even more sensitive than before! Awesome!
Next, was firmware version 20. All went smoothly, as above. This time, what I found, in addition - was that the unit was more responsive to input (such as pressing buttons, making selections, launching modes, etc.).
I was pleasantly surprised, and well-pleased. The Griffin from BatBox Ltd. is truly a brilliant machine.

Email ThisBlogThis!Share to TwitterShare to FacebookShare to Pinterest
Labels: Griffin review part 3 of 3, New Firmware, The BatBox Griffin, The Griffin From BatBox