If you've been keeping abreast of top-of-the-range bat recorders recently, then you're probably familiar with The Batlogger M (from Elekon AG in Switzerland).
By now, I'm sure that many of you are well aware of what an incredible bat detector it is. It's capabilities have been proven to exceed those of instruments in it's price range, and several costing much more.
Just to reiterate my thoughts on The Batlogger M: I've found it to be the best performing bat detector I've reviewed thus far.
Several distinguished Bat Workers feel just as enthusiastic as I do about the Batlogger (if not more-so!).
I'd never really given much thought to the possibility of this unit performing even better...
Then Elekon made some optional Microphones available, amoung them is one called 'FG Black' - The fact is, they have made more than one optional microphone available. And they have been available for as long as the Batloggers have...but this Post will focus on The FG Black model. 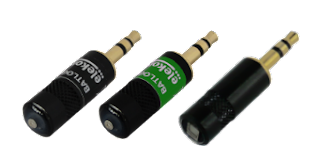 In the photo above, from Left to Right: The FG Black, The FG Green, The BL (Stock) Mic

What follows, are my initial impressions and findings. I believe that I'll be able to gather enough detailed information about this mic to write a more lengthy Review. If not, I will simply update, and add to this Post.

Just Imagine, being able to take the "stock" Batlogger, and increase it's capabilities even further.
As you may have noticed from the microphone chart on Elekon's Site: The FG Black features an integrated preamplifier (Wiki Link explaining what a preamplifier is).
Which helps to explain why this microphone upgrade has such an amazing impact on the detector's overall performance.

I'm monitoring it's sensitivity even now, as I type; and it's simply wonderful.
It wasn't like this on the first night I tried it out! It was rather chaotic - I simply wasn't prepared for the dramatic difference compared to the stock mic (A MEMs unit, called the BL).

With the FG Black attached (using my good quality shielded audio cable) all manner of singing Insects were being detected (and recorded!)
At first, I really wasn't sure why this was happening. The first possibility that I thought of, was that certain singing insects may have just recently become active. I considered the possibility, that a certain combination of environmental conditions was responsible (for the sudden increase in insect songs).

In any case, the first thing that I did, was to go into the Batlogger's settings, and decrease the sensitivity of the trigger. I increased the threshold from a setting of 6 to 7. Yet, some singing insects were still being recorded. I didn't mind the fact that they were heard - But, at this particular point in time, I did not intend on recording them. I eventually increased the trigger to 9, in order to stop them from being recorded.
It was obvious that this new, amplified microphone was so much more sensitive than the stock microphone. So much so, that it was easily pulling in several species of insects (residing in the surrounding trees & vegetation). Singing insects which were not detected at all, using the stock microphone.
Switching between the microphones several times confirmed this.

Thanks to the comparison chart, provided by the researcher who preferred to remain anonymous: We know that the Batlogger and Batlogger M are able to detect and record bats, at distances of well over 60 Meters... The addition of the FG Black microphone presents some fantastic possibilities, to say the least.

At this time, I have only scratched the surface of what is possible with this new microphone. I've tested it on several nights now, of course the sensitivity is terrific! And of course there's an increase in the number of bats recorded per night. But, there are more tests to be done – and more findings to report. Especially in regards to it's usefulness to those who study (and record) Orthoptera.