This Part 1 Of 3, will serve as an Introduction / Prelude of The new SMZC. Part 3 will feature the screenshots, sonograms, recordings, and other colorful goodies...

The New SMZC is the latest unattended bat recording solution from Wildlife Acoustics. It combines small size (especially for an un-attended/tree-mount unit) with a very competent zero-cross technology recorder. An informative (back-lit) LCD display, status LED (where would we be without LEDs?), and GPS capability round out The SMZC's main features.
Some of the very first pictures I took of this new Songmeter, may be seen on this Post.

The Songmeter SMZC might be considered a "smaller sibling" to The SM3BAT (also from Wildlife Acoustics). One of the main differences, is that this machine records in zero crossing mode only. Whereas in The SM3BAT, zero crossing mode is an available option.
It seems to me, that there is definitely a demand for such a machine. A lower-cost ZC recorder, which may be confidently deployed as a rugged, unattended monitoring solution for bats. From what I've seen and read: Many companies who need to perform unattended bat surveys, are in need of exactly these types of features.
The lower cost translates to more remote units in the field - Which in turn, translates into more data collected. When it comes to unattended monitoring of bat activity - One could pair this SMZC up with their Kaleidoscope software, and have a powerful combination for the accurate collection (and processing) of data.

Of course, I was very curious about this new machine from the very beginning - Back when I first learned of it's evolution and progress. I wasn't sure exactly what to expect with The SMZC, but after some thorough testing, I haven't found much about it that I don't like.

Initially my main concern, was the fact that The SMZC is a zero-crossing recorder - Now, the zero-crossing technique may have it's place in the world of bat recording...It's engineered to help Ecologists and Bat Workers. However, I've never found bat recorders using this method to be very exciting.
I've collected (and analyzed) many zero-cross recordings over the years. Most of them, were produced while testing The AnaBat SD2. Analyzing and playing the sounds back, was not exactly exhilarating; regardless of the software used (of those available at that time).
In other words, quite stale and boring - Especially when compared to what we have available today! Of course, this is not to say that bat call analysis should be exciting; just that I happen to prefer it that way. If working with bat recordings makes-up a large part of your career, then perhaps this is also true for you?

Software like Kaleidoscope allows one to display bat calls in a dozen different (and useful) ways. And it does this quite easily, I might add.
I've often wondered: How could anyone actually prefer a black-on-white display, over a full-color Hanning representation? Putting aside the aesthetics, color representations of bat calls are (scientifically) much more significant; to say the least. More on this topic in Part 2...

This new SMZC has actually changed the way I look at the zero-crossing recordings of bats - Literally. I believe the "secret" (for my renewed interest) is in the way their Kaleidoscope software handles the recordings. It was a bit of a surprise to me.

However, I suppose it was the ease with which one can playback a bat call, which opened my eyes to the usefulness of zero crossing. Using Kaleidoscope software, that is.

The new Songmeter SMZC arrives just as well-packaged as any of the other products from Wildlife Acoustics. 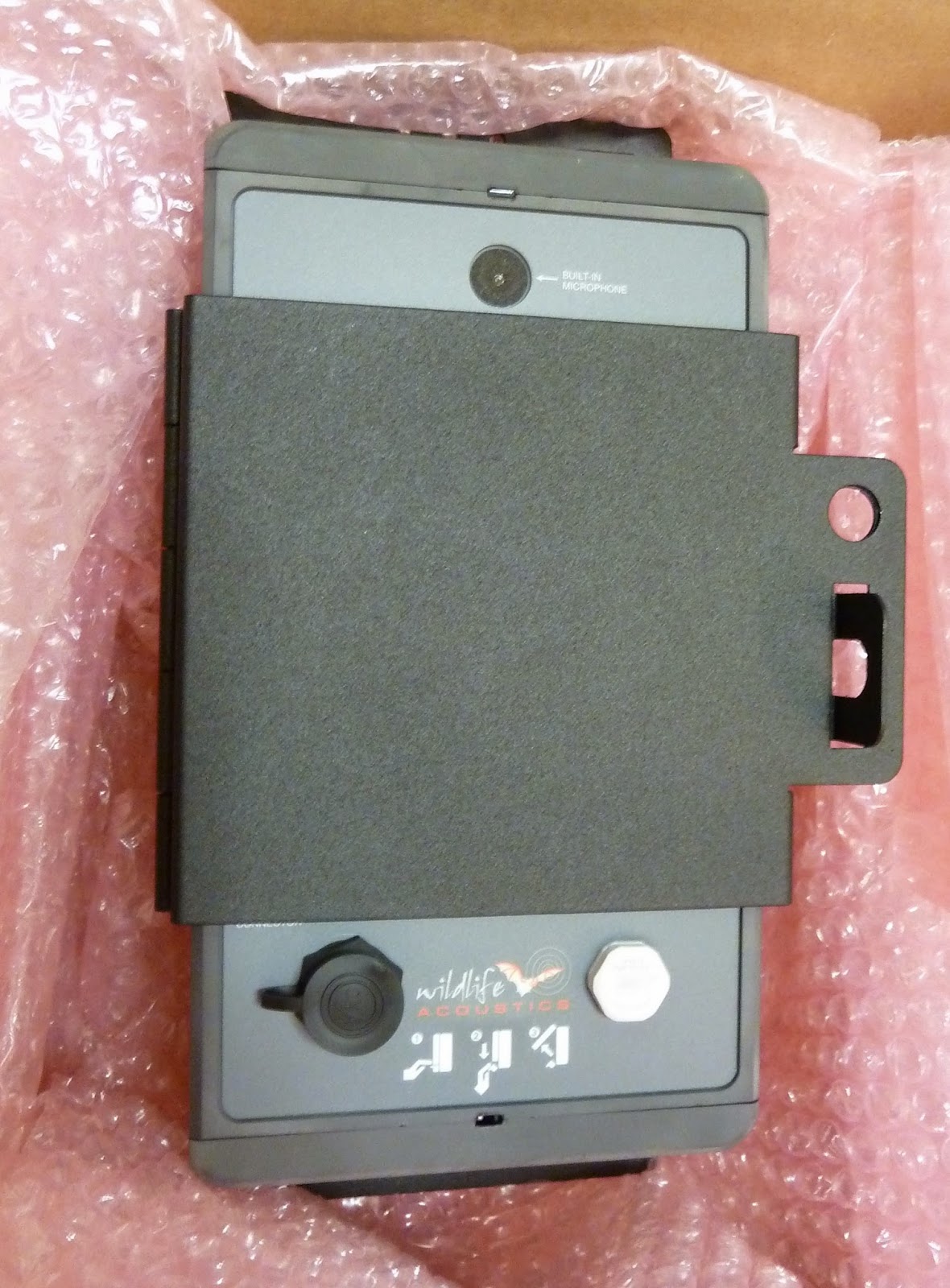 In it's (optional) mounting bracket (prior to installation of the easy-open latch).

Pictured above, is a snapshot I took while unpacking the new loaner unit. It was so new, that the easy-open handle was not attached yet. I received one of the very first production units as a test loaner. This was long before The SMZC had gone into full-production.
Since then, the latch has been installed (by me) and is pictured below, just for reference. 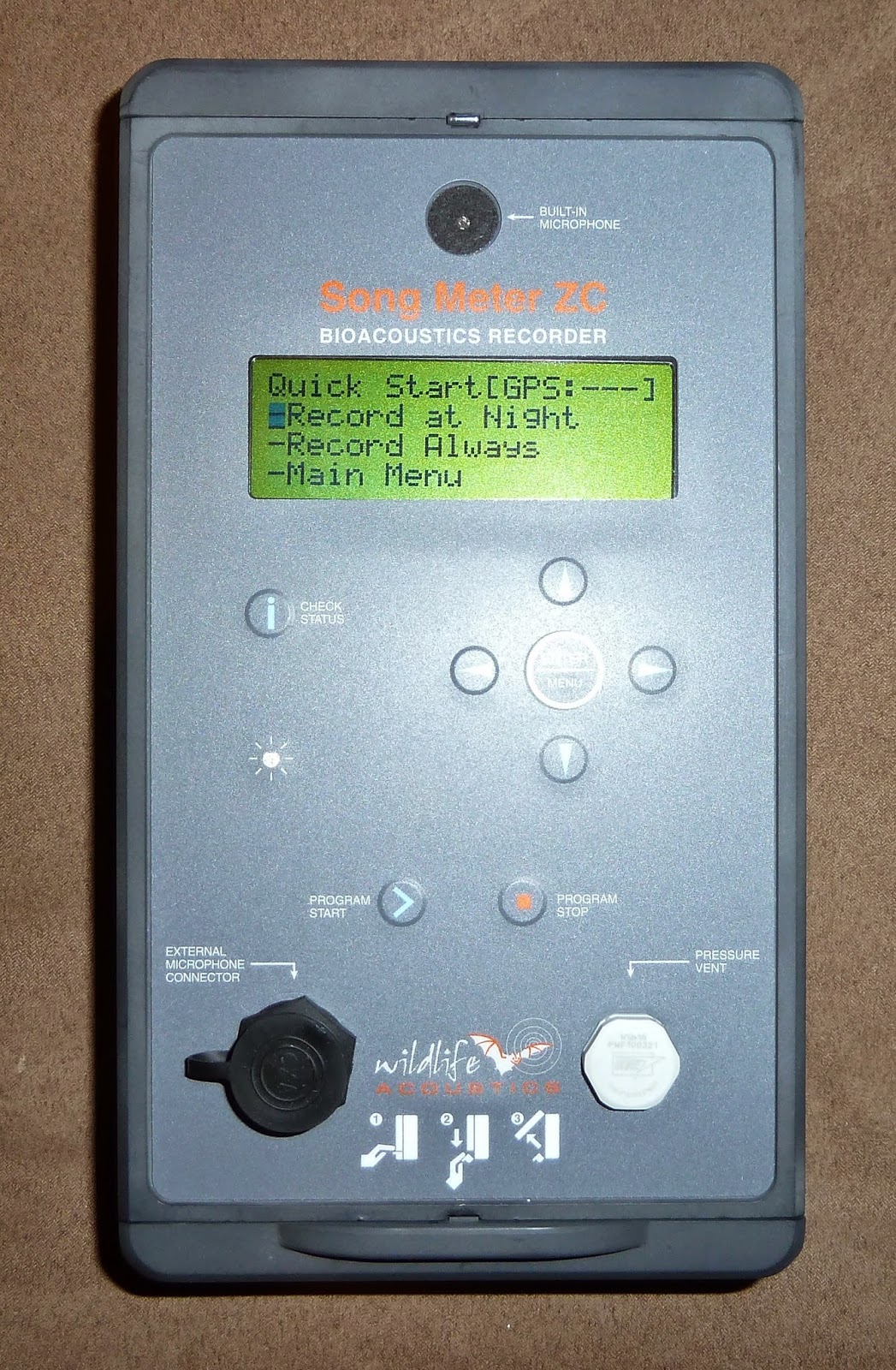 I must state that I like this new unit! It's small size (11.5" x 5.0" x 2.75") makes it very easy to handle. It's manageability makes it easy to set it up, especially for some spontaneous bat recording sessions.
For example, I was fortunate enough to have this machine with me, on a trip to the Lake George (NY) area.
We stayed at a wonderful cabin on a river; and I was able to (easily) place The SMZC on a table (on the back deck) facing the river. Leaving it there to simply record bats overnight, provided me with lots of great recordings. These will be shared in Part 3 of this review... 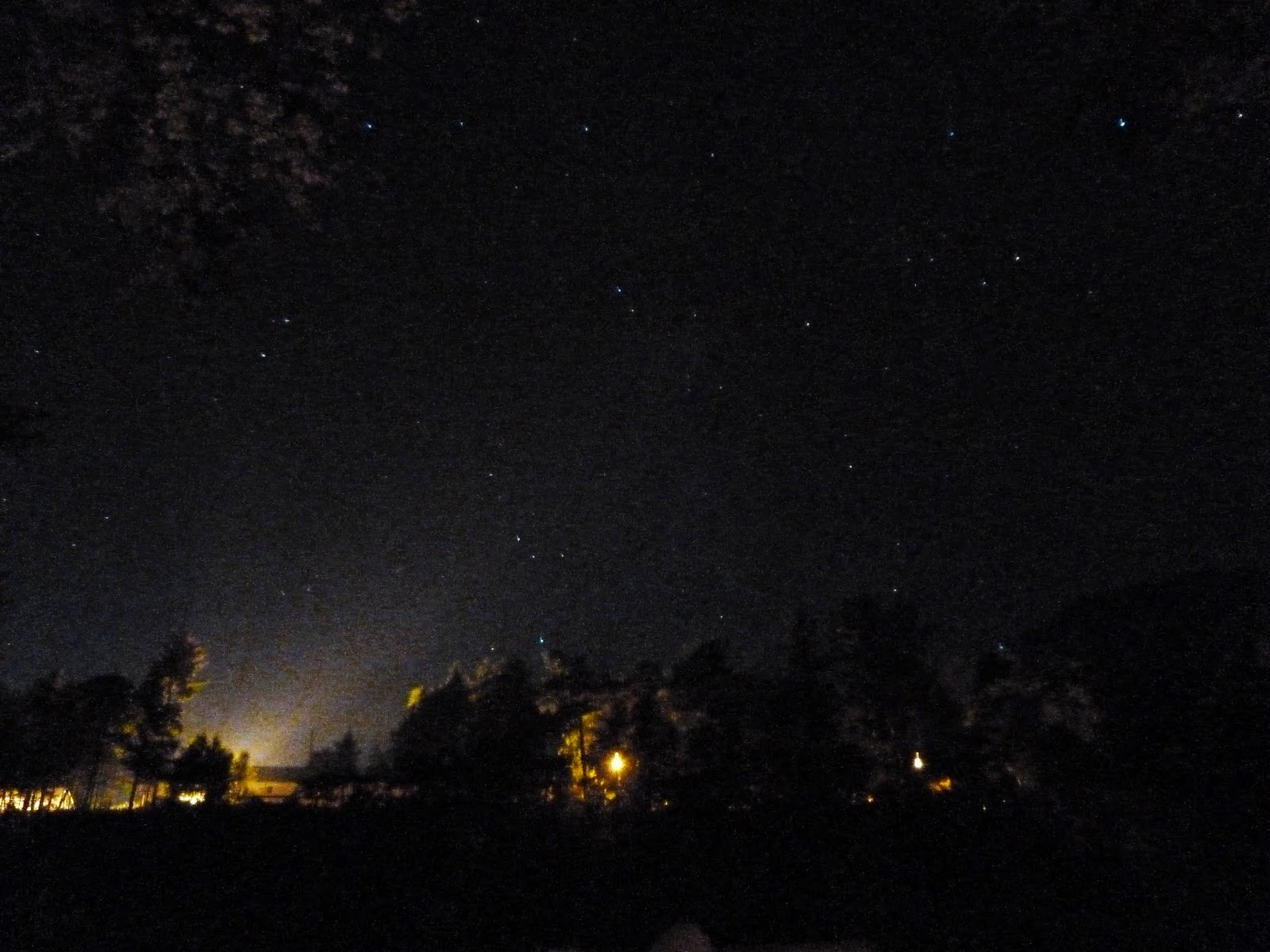 It's probably safe to say, that this newest Songmeter from Wildlife Acoustics wasn't designed so that bat detecting Hobbyists could make impromptu recordings...The reality is, The SMZC is a serious unattended recording solution, devised to meet the needs of Bat Workers and Ecologists Worldwide. It's designed to be professionally set-up (deployed) and allowed to monitor and record bat activity, for about a month (before collecting the SD memory card[s] containing the data).

At this point, I'll share the link, to the easy-to-read Comparison Chart, provided by Wildlife Acoustics.

It's plain to see, that Wildlife Acoustics has been listening to those who routinely survey bats, and have developed a new solution from the ground-up. The SMZC is designed to collect large amounts of recorded ultrasonic bat calls. Historically, zero-crossing technology has always been selected, whenever large quantities of ultrasonic recordings were expected. This is because ZC bat recordings consume much less memory space than almost* (any) other bat recording method.
Note: I've indicated * "almost" because there are, in fact, some other recording methods out there, which take even less (memory) space. 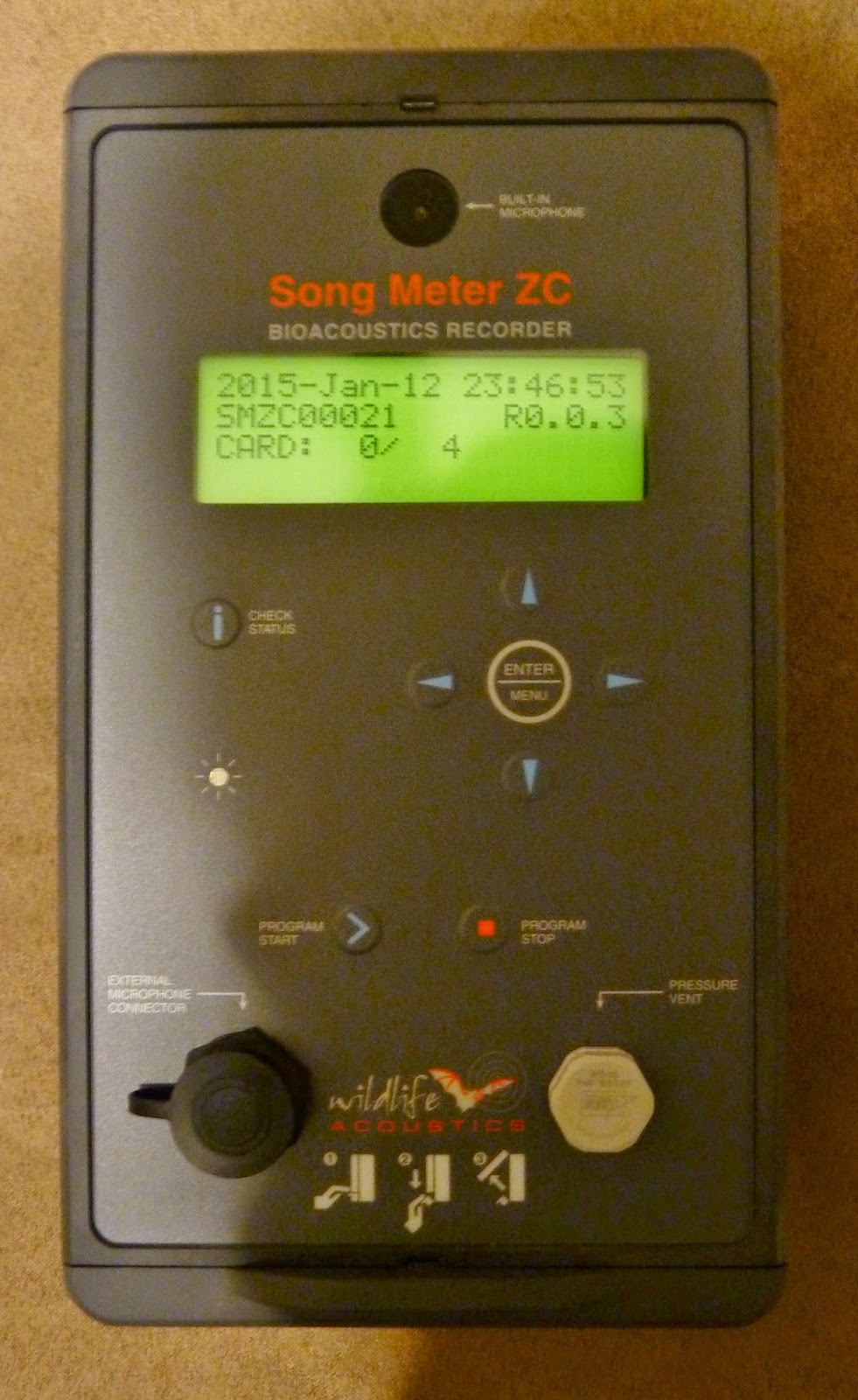 I really like the ease with which an SMZC can be deployed. Very simple set-up; with Menus and commands which are nearly intuitive. This is more of what an un-attended recording solution should be like:

If you need to deploy several recorders, in various sequestered locations - And, you need to do it quickly - The Songmeter SMZC would probably be the machine you choose.

The price, may also be attractive, to many in the field of Bat Ecology: Currently $649 (US Dollars).

One of the best places to order the new Songmeter SMZC, is directly from Wildlife Acoustics themselves. However, depending on your location in the World, you may find a better deal from Authorized Resellers in your Country.