Review Of The AnaBat Walkabout Bat Detector - Part 2 Of 2

The AnaBat Walkabout bat detector from Titley Scientific, is a high-quality bat detecting/recording device, with an abundance of features.

One of the reasons for this, is The Walkabout is built upon an Android tablet. Not an off-the-shelf / consumer tablet, but one specifically designed (from scratch) to be The AnaBat Walkabout. Being built upon such a versatile foundation has it's advantages.

One of the things which I admire about The AnaBat Walkabout, is how robust it is. It is very reliable. Not prone to crashing, or freezing-up, the way a low-cost tablet might.


During the testing of The AnaBat WalkAbout, I left the microphone's sensitivity at the default setting (as from the factory).
If (you are fortunate enough) to have bats flying low, or close to you: You may want to change the sensitivity, to a lower setting. If not, you are likely to end up with spectrograms containing prominent harmonics - As seen in my example below:

As a continuation from Part 1 of this review, here are some additional specific features which I particularly like:

If you enjoy tinkering with electronics - especially, DIY Ultrasound Mics (as I do), then you may find the last bullet point above particularly interesting.
I will inform you, that all of my early attempts/tests, with DIY microphones, were unsuccessful. This need not deter the reader from carrying out their own experiments.

I eventually came to the conclusion, that it would be best to stick to purchasing the official Titley microphone adapter and Mic, if there is a need.

In my case, having wasted so much time trying to build a working Mic, only bolstered my appreciation of the quality recordings captured with The Walkabout's built-in (Knowles) microphone. As is, The Walkabout is able to pick up bats at respectable distances; and produce excellent spectrograms while doing so.

Here is the optional Microphone Adapter, made for The AnaBat Walkabout from Titley:

Link to Titley's page on it Here.

The Walkabout's battery life is stated as being 8-12 hours (in The User Manual). This matches my experience while testing as well.
I plugged The Walkabout into the mains, with a completely flat battery, at 7 PM - And it was fully charged at 12 AM. This was early-on in the testing phase (first week of use). Actual discharge/charge times may vary (most likely, improve) with regular use (since it is a rechargeable, Lithium ion battery).


What's it like, getting and using The AnaBat Walkabout?
Allow me to make (another) analogy - Back when I was into the keeping of Mini-Reef aquariums. Something which was a lot of fun, was buying a piece of Live Rock... After situating it in the tank, and as the days went by: I would discover several fascinating & colourful creatures inhabiting the nooks & crannies of the piece of rock. And it was like little unexpected bonuses!
Well, it's a bit similar to using The Anabat Walkabout, as you:
Read the manual, and start using it - You begin to discover all these neat little features; which you didn't realize were there.

A great example of this, is when I discovered 'Basic Mode' (shown below). It is a completely different looking interface (listening in heterodyne mode) while recording. With several neat features: Live Temperature, Lux, and Humidity sensor readouts, as well as an electronic compass! 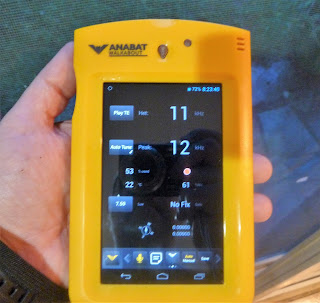 In summary, I'd place The AnaBat Walkabout in the same class as other "Alpha" bat detectors; such as:

The Walkabout is very easy to use:

I have found The AnaBat Walkabout to consistently produce accurate, and detailed recordings of bat calls. Which in turn, facilitates production of excellent spectrograms.

Here are some links to the additional (optional) accessories, offered by Titley for The AnaBat Walkabout:

The next bat detector to be tested and reviewed will be The (brand-new!) AnaBat Scout from Titley Scientific. It's always exciting to test and review a brand-new bat detector; and I'm really looking forward to it!

Posted by batdetectors@gmail.com at 7:08 PM