Review: The Brand-New EM Touch From Wildlife Acoustics - Part 2 of 2

As we've established, in Part 1 of this review, the ideal buyer for The new Echo Meter Touch, would be someone who already owns a compatible Apple iOS device.
This product is also good for someone who prefers a bat detector, which has the ability to constantly improve. This is accomplished, via The EM Touch Software -and- Firmware updates. These will be released regularly, from Wildlife Acoustics.

Further good news, is that (as with other iOS Apps) you will be prompted/notified, directly on your Apple device. So, there are no worries about missing or overlooking an e-mailed Newsletter.
The following, are conclusions which I've reached, after using The Echo Meter Touch (with iPad mini Retina) for almost a month now.

So far, I've confirmed The Echo Meter Touch recording bats from a distance of just over 20 Meters. Fairly impressive for a bat detector in this price class. However, I have a feeling that it will be able to pick up bats from even greater distances.Therefore, I will continue to test the EM Touch, to determine the outer limit of it's recording range.
Just a bit more testing, in a different location should corroborate this for me. And of course, any findings, etc., will be published here - In an future (update) post.

The distance at which a bat detector can detect and/or record bats, has always been one of the most important factors (for me). This is the case whenever I evaluate any bat detector.

The GPS performance is absolutely wonderful! Thanks to the constant access to Google Earth/Maps. I have not seen a GPS system this accurate, since Elekon's Batlogger M.
Thanks again to Internet access, the live (and recorded) GPS' accuracy seems to be just a hair more precise than even The Batlogger's. For example - When doing some simple bat detecting from within a home: The Batlogger M almost "knew" which room of the house you were in. With The EM Touch, it actually does "know" exactly which room the unit is in.
This observation simply illustrates just how accurate the GPS is. By default, the exact location of The EM Touch+iOS device is represented by a pale blue dot (not shown in photo below). I was pleasantly surprised by it's accuracy. And those performing Transects will be too!

In the photo below, each colored line represents a different recording. Typically, these will be of various bat calls. And will serve to represent the location where each bat was recorded. However (in some cases) there may also be some, from non-biological recordings (man-made noise for example).
Since the recordings shown below were made from inside a house: The GPS readings tend to get confused. Which, results in the random squiggly lines you see in the image below. This does not occur when using the Echo Meter Touch outside, in the field. 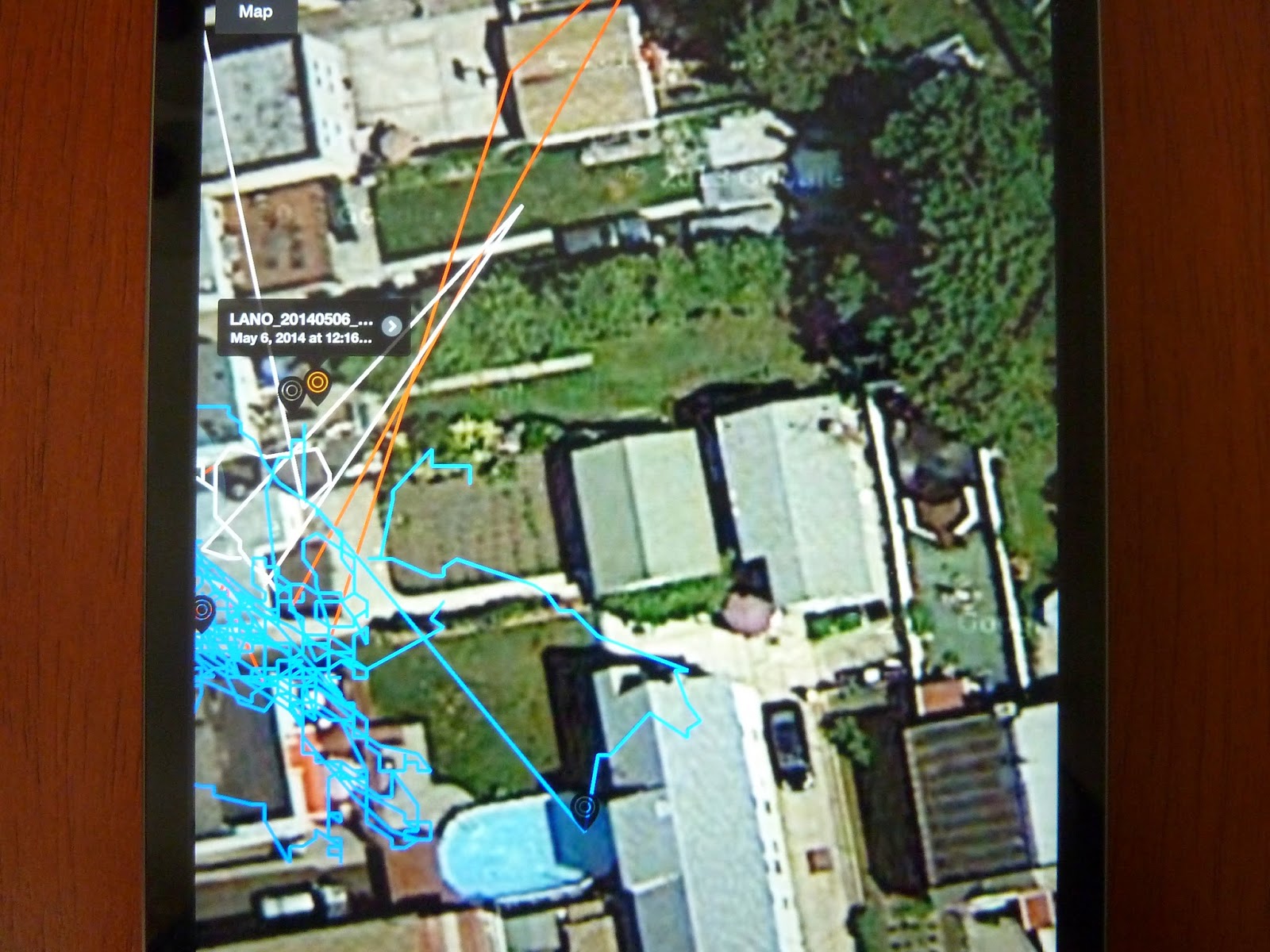 Pros:
Cons:
*The interesting thing, about the issues in the above list of Cons, is that at least two of them can (and may) be reconciled via firmware updates. Specifically, the Microphone sensitivity adjustment and Trigger threshold setting. Once again, it's hard to ignore the flexibility (and possibilities) of The Echo Meter Touch.

In closing, I'd like to share a quick video I made, demonstrating one of my favorite features of The EM Touch Auto ID software. I highly recommend going for the In-App purchase! You'll be glad you did. In this quick (and spontaneous) video, "shot" in my living room, you can see The Auto ID software analyzing each of the recordings: The blinking yellow bat icon, represents the analysis being performed on each individual recording.
When the blinking bat goes from blinking to solid - It means that a bat was recorded (and identified!). The standard, date-time format of the recording's name, is appended with the abbreviation of the bat's Species name. Which, in the case of this short video, was 'LABO' (Lasiurus Borealis) - An Eastern Red Bat. I apologize for the poor quality of this video, I hope to replace it with a brighter version soon.

As with several of my recent reviews, I will certainly be revisiting The EM Touch; via future blog posts over the coming months. I promise to help everyone keep abreast of any new developments.