My usual workflow, is to:
Remove the SD card from the SM2 and check it (on PC) for recordings from the night before.
I select one WAC file at a time - Working from the largest (WAC) file to the smallest.
Convert the WAC file to WAV format using the (free) WAC2WAV converter application. The WAC2WAV software allows for a few options & variables. One of the options, is to choose (check-box to tick) is the 'Divide Output By 10' which I normally use. This provides you with wav files that are slowed down by a factor of 10. So, for example, if you were to analyze the files later with BatBox's Batscan SW- You don't have to select anything for 'Frequency and Time Conversion' - It should be left 'Off' which is the default.
Typically, the conversion will produce a lot of individual files. So, I go through each of them, using the same method above.
Recently, I've been using Audacity, to open each Wav file. It's very convenient, because it gives you a visual representation of the audio file very quickly. You can see if there are any bat calls, mixed in among the insect calls. My trees are all occupied by Katydids, etc. - I'm not complaining ('cause I like recording them also!). But, when you're focusing on bat recordings, you have to "weed them out" of course.
Since it's now mid-Summer, I usually find an abundance of my triggered recordings to be entirely of Katydids (for instance). And, I simply delete those and check the next file.
Again, using Audacity (or another audio app) which displays the 'Project' (audio track) conveniently:
What I do, is 'Select All', Amplify' and look at the recording closely, to find any area that looks like a bat call.
I also find myself listening to certain areas of the recording sometimes, just to be sure.

Adhering to the chronological order of a typical workflow, we have:
A typical wav recording (for me), displayed in Audacity: 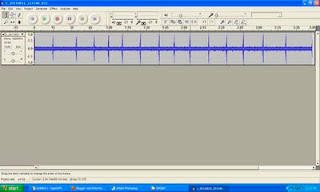 The above shows a recording with nothing but a Katydid calling. This gives you an idea of what a recording without bats on it looks like.
I've also found, that if you're in a hurry: You can open multiple (wav) files at the same time; and just glance at each one (before closing/deleting) and you can see the bat calls (if they are present) right away. Without even having to 'Select All' and 'Amplify' for instance. It all depends on how much time you have.

This next image, below - gives you an idea of what a recording with bats looks like: 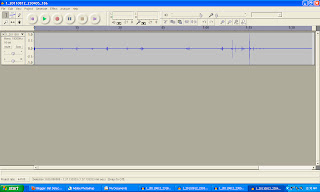 The bat calls, are represented by the "long spikes" on the right-hand-side of the spectrogram. So, as you can see, it's very easy to tell which recordings picked up bat calls - And, which didn't.
Most times, I like to select the area containing bat calls; and cut/paste/save into a new wav file. Which would look like this: 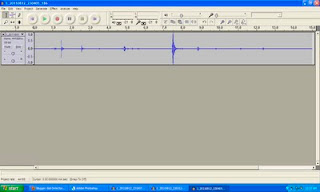 And then, you can look at/analyze the (wav) file, using the application of your choosing. Such as BatBox's Batscan software. Which will produce a sonogram like this quite easily:

BatScan just happens to be the application I go to (these days) - But again, any suitable app of your choosing may be used. For instance, the image above was made quickly, using just the default settings. But, it can be: Enlarged/zoomed-in on, to create an even more prominent "hockey stick" look to the calls.
The kHz settings can be changed, for a more accurate display and analysis.
And, (for a quick "trick") if you do select 'Time Expansion' it will automatically produce a more accurate analysis - Where you can see the calls were actually made between 40-50kHz (Big Brown Bats typically echo-locate between 25-51kHz) see below: 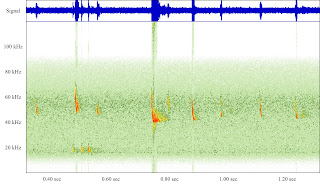 In the above example, you can also see a few Katydid chirps, on the lower left.
The recordings produced, using the SM2BAT are very high-quality. The 192kHz sampling rate is very nice - Crisp & clear. My next post(s) will feature some audio files you may listen to, made by the SM2BAT. And, probably some made by the Pettersson D240X; since I am still very fond of the TE recordings produced by that unit as well.
I hope that you've found this (3-Part) review of the SM2BAT informative (and hopefully, interesting as well).