Just an update/reminder: The new bio-acoustic recording device that I'm currently reviewing - Is The Song Meter SM2BAT, from Wildlife Acoustics. Wildlife Acoustics is located right here, in the USA (Massachusetts to be exact). Preliminary tests of the SM2BAT are promising, it's designed for un-attended (long-term) monitoring. And, it's microphone is very sensitive.

Also, the SM2BAT platform compares very favorably to other cutting edge ultrasonic recorders. I'm still going through the recordings from last week, and need to determine the best format to use, to present the sonogram images here. Unfortunately, I've had nothing but lousy (rainy) weather here this past week...So, I don't have any new recordings.

The fact is: The SM2BAT platform was designed to be deployed outdoors - Many very clever features were utilized in it's design. It was made to remain safe, and functioning in conditions where other bat detectors simply would not survive. This is very advantageous to Bat Researchers...As for me, I always employ an extra measure of caution. Which is why I wouldn't place it outside, even in the lightest drizzle...

When using (or owning) expensive bat detecting equipment, it's hard to avoid the "nervousness factor" (for lack of a better term). It's similar to owning/wearing an expensive wristwatch, or other piece of jewelry. For lack of a better analogy. One of the differences is, that many times an expensive detector is precisely what is needed.
If one is determined to try and identify the species of bat being monitored - Whether it's a dedicated hobbyist, or as is most frequently the case: a Bat Researcher. An advanced detector is a necessary tool. In the case of $1,000+ USD ultrasonic (bat detecting) equipment, a measure of very careful handling is prudent. I believe most would agree. The recent spell of lousy weather we've been having here, is also the reason why there haven't been any new sonograms posted from the Pettersson D240X (That detector is like a Fabergé egg).

The weather forecasts call for more rain this week...but, we'll see...I hope to have some new sonograms/recordings up here soon.

In the meantime, here are some photos of the interior of the SM2 system, along with microphone attached: 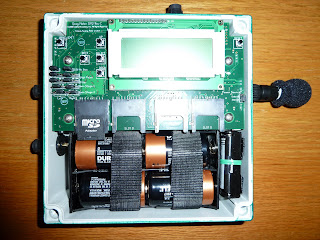 This photo shows the various jumpers: 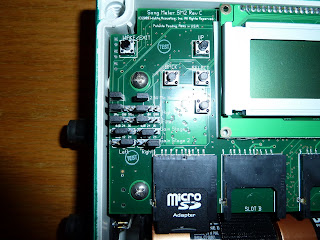