This Post serves as Part 3 Of 3 of The Titley Anabat Swift Review (If you haven't already, see Part 1, Part 2)
As well as the testing and comparison of the 3 microphones which are currently available, from Titley Scientific. These optional Mics allow additional, significant customization of your AnaBat Recording set-ups.
In it's current state, this post is just a rough outline, I'm posting it here as a placeholder. It will be added to, as soon as time allows.

Owners of either The Anabat Swift, or The Anabat Express bat recorders, should be aware of the 3 Microphones currently available, from Titley Scientific.

The post immediately preceding this one, lists some detailed specifications and information on each of the 3 Mics (as per Titley).
What follows below, are just some of my findings:

While doing some experimental tests, using The Bat Chirp II (artificial bat, made by Tony Messina); I was able to get (mechanical-looking) sonograms. I'm sharing these here, mainly as a "curiosity".
This was at a distance of 50 feet.
Here is just a small section of the sonogram, as recorded by "Mic #1": The US-0 V3 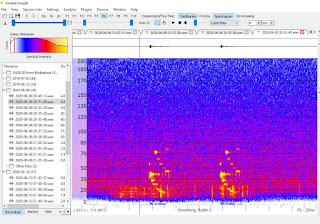 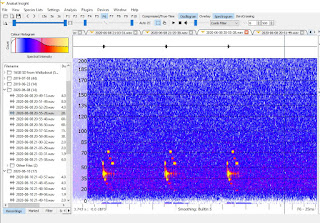 For my own purposes of organization, I refer to this microphone: Anabat Omnidirectional Acoustic Microphone AS–0 V1
as "Mic #3" - I apologize for not having a spectrogram from this Mic to share. I am currently still sorting through the recordings made using this Mic (again with the aid of The Bat Chirp II [artificial bat]). I will be adding (at least) one sonogram to this post soon...

Here is a sonogram of a real bat, made using "Mic #1" Anabat Omnidirectional Ultrasonic Microphone US-0 V3 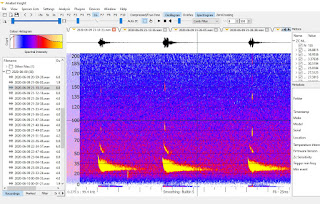 For further, current Info, on these Mics as well as other compatible accessories, have a look at this page, from Titley's Scientific's Site.

Until then, Happy bat detecting!